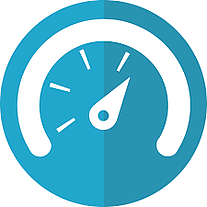 If I asked the average computer user “What part of a computer makes the biggest difference in speed?”, what do you think the answer would be? Most people would argue that the Central Processing Unit (or CPU) would determine that. And in a lot of cases, this might be correct – the CPU does determine how fast a computer gets basic jobs done… Others might say the amount of memory affects the speed. Once again, this is not bad information – after all, how much Random Access Memory (or RAM) you have influences the workload that your computer can handle. Back in the 90’s and early 2000’s, CPU designs were taking huge leaps ahead, and programs, even basic ones, were using more memory with every new version. That computer you bought even a couple years ago would soon feel sluggish and outdated, as technological improvements would continue to drive the market forward.

In the span of twenty years, computers have gone from the steam locomotive to the jet airliner in terms of how powerful and sophisticated they are. However, there is one component that everyone neglects – one that hasn’t grown at the same rate of speed as those above: the hard drive. Most modern hard drives are still very similar in design to their predecessors from the 80’s. Although they have continued to increase in storage space, modern hard drives haven’t gotten a whole lot faster. While most components of a computer are electronic in nature, a hard drive is still mechanical – it relies on physical moving parts and a spinning disk to read and write information. Every time your computer starts up, loads a program, or opens a file, the hard drive is tasked with finding and reading that data. Multiply this by thousands of individual files to be read and you can see where a slowdown occurs. The CPU and RAM don’t have this limitation – they can read similar amounts of data in the tiniest fractions of a second. We call this a bottleneck – where one slow car on the off-ramp leads to an entire traffic jam. Your computer can only go as fast as its slowest part.

So, what’s the solution for this? If manufacturers could make hard drives significantly faster, they would have. Competition drives innovation in the technological market. So, as propeller planes couldn’t go any faster, they invented the jet. A different type of drive altogether, the Solid State Drive (or SSD), has been around for a similar period of time as the Hard Disk Drive. However, they have only recently become inexpensive enough to be practical. Major companies have recently begun to see the advantages of using said types of drives. Apple has been using them as the standard drive of choice in the MacBook lineup for several years now, and Microsoft has been putting out advertising campaigns advising PC buyers to opt for systems with these drives.

For the vast majority of computer users, modern CPUs and RAM have been powerful and plentiful enough for some years now. While technological advancements have come to the these particular parts, the hard drive that supplies critical data has been the limiting factor. Even older systems can feel snappier and more responsive than their brand new counterparts when equipped with these new drives. And when the relic from 2009 can run circles around a computer 10 years newer, there should be no question as to which of your parts should get a face-lift.