Windows Defender: Is it Enough?

A lot of Microsoft’s talk about Windows 10 has been dedicated to its enhanced security features and has even gone so far as to make the claim that a third party antivirus is no longer necessary for Windows users. Windows Defender was originally provided as a free download from Microsoft for the Windows XP platform, but it has recently been completely rebuilt and overhauled for Windows 10. 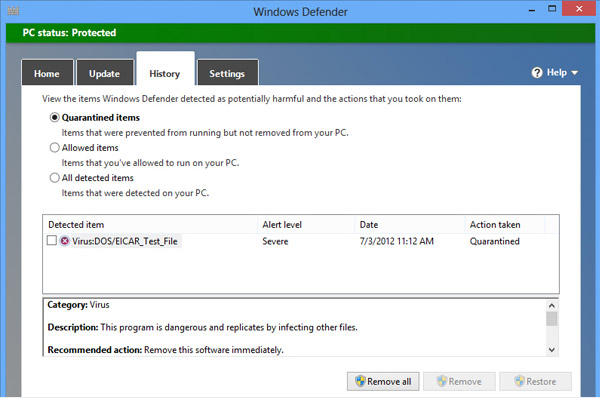 Now, it is true that the effectiveness of Windows Defender has been improved dramatically over previous versions, and the platform has a lot of advantages over other mainstream antivirus products, especially among its free peers. In addition to this, its actual effectiveness at stopping malware in its tracks is good, too. It will nab the vast majority of dangers on the web, and it gets a lot of help being the native favorite of Windows. However, the bottom line is, among the top performing paid antivirus products on the market, Windows Defender does fall somewhat short of some of the others. Is it bad? Not by a long shot. But does it still have room for improvement? Definitely.

As we’ve already established its performance as being sufficient for most potential threats, albeit not to the same degree as some higher-end products out there, it’s important to mention its advantages and its potential improvements over other products.

For one thing, it doesn’t bother you and ask you for money on a regular basis. It’s free. That alone is enough for many people. Not only that, but it’s “free” in the literal sense, and not in just the “doesn’t cost money” sense. Many other “free” antivirus programs out there, while not actually charging you for money, will often do everything from continuously harassing you to buy their premium editions, or even installing junk software and useless or annoying programs on your computer in addition to themselves.

Secondly, it ships with Windows. Every new Windows machine has it pre-installed. This saves users the hassle of even having to make a decision or go looking in the first place. And in this day and age of look-a-like knockoffs, trojan horses, and misleading website adverts, not having to go looking for this piece can save you a lot more trouble than just finding the website download page.

Thirdly and lastly, it’s built to fit into Windows 10 rather well. It does not take up much space, it does not use many resources, and it does not constantly pop up asking to be updated to the latest version. It updates automatically and quietly, just like Windows itself does these days, and that’s a good thing. The less direction you have to give it, the better. And as it stands, no antivirus is as silent a protector as Windows Defender.

So, if you prefer a quiet, lightweight, well integrated, and free antivirus, give Windows Defender a try. It might not be the best out there, but at its huge price tag of $0 (both in terms of your money and your trouble), it’s definitely a tough one to beat.