What Your Child Could Be Hiding From You Online: Hidden file vaults, decoy applications, and secret messaging

Parents: did you ever keep secrets from YOUR parents when you were younger? Information such as where you went after school, if you were dating anyone, or where you spent your money? If any of this sounds familiar, you are definitely not alone. In those days, however, the exchange of information was a lot more limited, and with some things it was nearly impossible to keep a secret from your mother or father. Unlike those days, there are now far more ways in which kids can hide information from their parents, and in many cases, this information can put them in danger.

Many parents these days probably remember having a hard time getting secrets by their parents when they were younger. They had many tricks up their sleeves – skills they learned, often from being busted by their own parents. Secret contacts, convenient and unexpected schedule changes, random check-ups, or just plain intuition. You might think you had gotten off scott free, but a friend’s parent would tell your parents that you were over their house, or your parents would stop by your own house unexpectedly when you were playing hookie, or one of your friends would slip up and indicate offhandedly that you had actually visited the arcade or the movie theater instead of the book store. Whatever the case, at the end of the day, you would be in trouble. For some, that part is probably the MOST familiar part. But either way, both the rebellious acts, as well as the consequences that came with them, would be valuable experiences. After all, a bird has to stretch its wings sometime, even if that means crashing into the ground on more than one occasion. However, as technology has begun to outpace the rest of society, the amount of information that can be shared online has become far more dangerous to the well-being of many, and kids have only been finding more new ways to circumvent their parents.

One of those new methods is through a new set of secret or otherwise hidden apps, capable of doing anything from hiding pictures and text messages, to disguising themselves as other apps for privacy, to even sending temporary messages that “Self Destruct” after a time has passed. With these new tools at their disposal, gone are the days in which a parent need only look at their kids’ text logs or their internet history to see what they’ve been up to. In this case, the kids have begun developing tricks of their own. 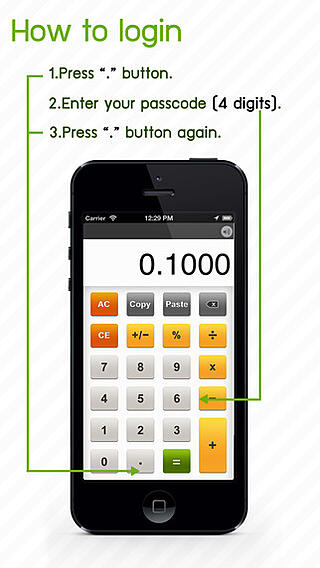 One of the newest and most popular applications is, at first glance, a simple calculator app called “Calculator%“. This application is not just a dummy app, it actually is a fully functional calculator. However, the magic happens when you hit the decimal key, input a series of numbers, which can be set by the user, and then hit the decimal key again. Just like that, the calculator app reveals a hidden space where the user can save information at will, information which cannot be accessed any other way. Beyond this level of functionality, the app is also designed in such a way to protect its user, even if the app is found out, by taking pictures of the person trying to log in, whether they are successful or not, and including them with a time, date, and GPS coordinates of the attempt in a log that cannot be altered. This app in particular has become SO popular that an article about it was even featured on ABC news, analyzing the different ways in which this app functions, and warning parents to keep an eye out for it. Again, to parents, watch for suspicious look-alike apps like these – if they’ve gone through the trouble of setting something like this up, you can be sure that they have something serious to hide.

Another powerful asset to those looking to hide their messages specifically is a unique project called “Kaboom“. This application allows one to post or send messages that have a sort of “self-destruct” timer built into them, which causes them to disappear after a certain amount of time. This does resemble what other apps are already doing, but there are some differences. In the case of Snapchat, users can send images and videos to each other that will disappear after a single viewing. The app is quite popular among millions of people, even many celebrities, and is typically innocent enough, but its temporary nature opens it in some kids’ minds as an excellent means of sharing sensitive information that cannot be saved. What many don’t realize, however, is that receivers can still screenshot the open picture or a frame of the video, and thus save it permanently. On the other side, an app like Wickr offers an entire Instant Messaging service with self destructing text messages. The app is so secure and well designed, that it’s even used among state officials and journalists in oppressive countries to communicate discreetly. Thankfully, it’s not too popular among kids yet, but the potential it represents makes it certainly worth mentioning. What sets Kaboom apart from the former two is that it does not require users to switch to a new app or service to use, and instead allows users to send self-destructing messages through the services they already use. Nearly any major messaging application or social network can be used with the app; this includes Facebook, Twitter, Instagram, and others, but it also includes forms of communication everyone has access to already, such as Email and Text Messaging. This leaves Kaboom as one of the more potentially widespread methods of discreetly messaging.

Needless to say, this caliber of unmoderated communication that many kids have access to can be very dangerous, and the news is always rife with stories of abductions, kidnappings, or dangerous behavior. Naturally, many parents try their hardest to keep a protective eye on their kids’ online and social activities, but doing so can quickly become a full time job, and with some of the applications above, almost impossible. Thankfully, there are some good practices to follow that can significantly improve one’s chances at keeping their kids safe, and ensuring their security online.

First, the tried and true method of keeping an open contract of communication with your kids is important – talking about a problem with your kids, rather than just jumping right to a punishment, can help them understand why you feel the way you do, and that you aren’t just being completely arbitrary and controlling. Make the problem real; remember, the things you’re worried about don’t actually exist to your kids, and as you might remember, in their minds, they are invincible. Being a resource for discussion, rather than an authority to hide from, can definitely help in removing the need for such apps or secrets in the first place.

Secondly, keep your hands on the reins, but don’t hold them too tightly. As a young adult, I can definitely attest to the fact that I was more likely to fight back the more I felt the prying eyes and meddling claws of my parents in my affairs. Some kids see their parents almost as a government or state of sorts, and romanticize the thought of breaking free from their proverbial shackles. Don’t let them feel like they have anything to hide, as before, but most of all don’t let them feel like they’re being watched. You have to stay involved to keep them safe, but being subtle and non-invasive about it can make them feel a lot more comfortable. Imagine how you might react if some government agency like the FBI showed up and started installing cameras and listening devices around your house. You would protest and act pretty rebelliously too, I would imagine. Keep in mind how you want to be seen; do you want to be the noble Jedi protecting the innocent, or the sinister Galactic Empire, destroying worlds and oppressing the masses?

Third, if it seems to be turning into a real problem, you can always enforce your rules technologically, too. Don’t use passwords on your devices; they’re often easy to guess, and if you enter them around your kids enough, they’ll know them in no time. Instead, use something they can’t fake. Namely, many popular smartphones and tablets these days have fingerprint scanners; those can’t be tricked by the press of a few buttons. For those devices that don’t have fingerprint scanners, applications often exist that can allow you to log in with other more secure means. Any device with a camera will usually have the capability of working with a facial-recognition app, and some devices have other unique password-substitutes such as knocking a rhythm on the screen or drawing a pattern with your finger. While fallible, these latter methods are much harder to guess or remember to an observer than a passcode.

Beyond this, you can secure devices against the installation of applications on their own devices by a few means. In the case of a Mac or PC, making their account a standard user account one while keeping an administrator account locked with your own credentials on the same computer will require them to ask you to install the application from your own account, giving you a chance to see it for yourself prior to installation. For Android and iOS devices, where having multiple accounts on a personal phone or tablet does not make sense, you can register your child’s account for the app store under your own, and invoke the requirement of your approval for all app purchases or downloads. This is where the above methods of keeping your own devices secure is especially important, as all this is for naught if your kids can simply get into your accounts and give “your” permission.

As a parent, keeping your kids safe can be difficult, but there are always options available to you to make the job easier. If you have questions or concerns about these types of applications, as well as the methods by which you can better protect your children, feel free to call us at RGB, or contact your local technician.