With Windows 10 now maturing into a more main-stream operating system following its July 29th launch a few months ago, nearly every user of Windows 7, Windows 8, and Windows 8.1 have encountered the option to upgrade. 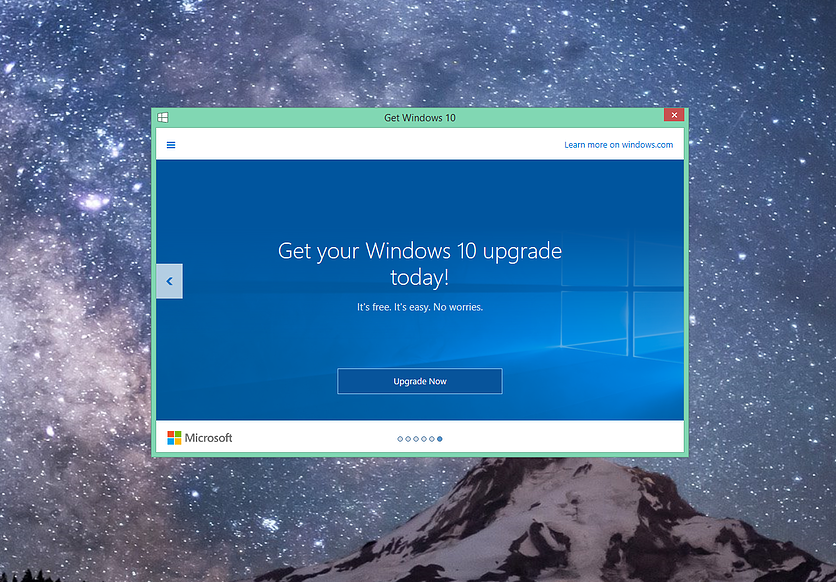 Now, a FREE upgrade to a brand new version of Windows is unprecedented, given that every previous version has cost money to upgrade, and especially considering Windows 10’s increased cost over previous versions for new licenses. At face value, it definitely looks like a good deal, but there are some things to consider before making such a jump.

First of all, a Windows upgrade is a pretty significant change to a computer’s software. One could even say it’s the most significant change a person could make – the operating system is like the building in which all the appliances, employees, furniture and decorations are placed. Upgrading the operating system on this level is essentially like ripping all of the aforementioned contents of the building out, bulldozing the building, then rebuilding a new one in its place with a slightly different design, and then expecting everything to fit exactly as it did before. In a lot of cases, everything will go smoothly. However, in a significant number of situations, some things may not fit quite right, or something may go wrong during the upgrade. When that happens, problems can manifest themselves in a number of annoying or even dangerous ways.

In addition to this, with every new iteration of software, it is expected for the design to change to a degree. As many saw with Windows 8, sometimes design changes can be pretty drastic in measure, and programs can become almost unrecognizable over a short duration. Now, where Windows 10 took many giant leaps forward, in regard to design it actually took a couple steps back into its more familiar roots. Many people find it to be just as similar to older versions of Windows, at least in appearance, as it is to Windows 8. Even so, there’s always a learning curve to consider, and if the person using the computer is not too comfortable with change, it is not recommended to make such a jump.

All things considered, Windows 10 runs faster, operates more smoothly, and requires less power than either Windows 7 or Windows 8, not to mention all the new features. However, for many people, it can cause more problems than solve, and may represent too much of a change. Windows 7 users should feel comfortable knowing that they can safely stay with their respective version and remain up to date. The same applies to Windows 8 users.

If you are comfortable with your current version, and don’t feel compelled to make the change, you should not be afraid not to. If you are, however, finding it difficult to use Windows 8, or are ready to make a change from Windows 7, consider Windows 10. It really is the best Windows yet. Same as always, however, it’s never a bad idea to get a second opinion from your IT Professional.

Can Macs Get Viruses?

We all remember the classic Mac Vs. PC advertisements of the late 2000s, where you would see casual “I’m a Mac” asking “I’m a PC” about all of his many problems. PC would then go on an awkward tirade about his glaring flaws and his “this just represents the status quo when you’re a PC” mentality. With an incredulous look on his face, Mac proceeded to recapitulate how “woe is you” PC’s existence was, and then outline a series of ways in which Mac doesn’t experience this problem or that. Of the many claims made therein, one huge drawing point Apple always made sure to underline was the invulnerability of Macs to malware-based threats. Commercial campaigns belonging to the Mac Vs. PC series ended several years ago, and yet many people still assume that Macs are immune to pretty much any threat. The truth is, although a virus by definition typically won’t pose a threat to a Mac, most people tend to mistake a “Virus” for the broader term of “Malware“.

In many cases, malware does not even have to be written for Mac OS to be able to get in. Especially in cases where Java or Flash are involved, nearly any device running either runtime can be vulnerable. Not only that, but many forms of pervasive Adware, which can be just as annoying to deal with, have been designed exclusively for the Mac environment.

When it comes to actual vulnerabilities that can be exploited, both Mac and PC have become increasingly more secure as time has passed, and relatively few major breaches occur compared to years past. However, devices running Mac OS are still just as crippled as those running Windows in probably their greatest vulnerability: You.

Many threats, from online scams, to phishing and identity theft schemes, to malware and trojan horses, are designed with minimal or no intention of breaching or otherwise exploiting a vulnerability in software design. Instead, they aim to trick or convince users of their validity, and then, once they have your unwitting permission, they carry out their purpose, whatever it may be.

At the end of the day, the best defense against malware is a conscientious user. Gone are the days of click and think; the best practice today is to think before you click. Always remember to read what’s on the screen, especially looking for the fine print – and ask yourself when you’re installing something, “Do I need to install this program? What purpose does it serve? Am I getting only what I’m asking for?” If you’re unsure of something, or a program looks fishy, don’t take the risk. Call a professional or your local technician and inquire.

Malware That Can Take Hostages

Were there a ranking for the most dangerous and show-stopping malware, the various types of Ransomware, and especially Cryptoviruses, would top the list. Imagine this scenario:

You’re browsing the internet, maybe watching a Youtube video, checking Facebook, playing a game, or maybe even reading some Emails, when a program pops up telling you that it’s time to update an innocuous program such as Adobe Flash Player. You think to yourself, “Sure, Flash is pretty important, I’ll update it.”

You continue going about your business when suddenly, your computer locks up and a window like this appears. 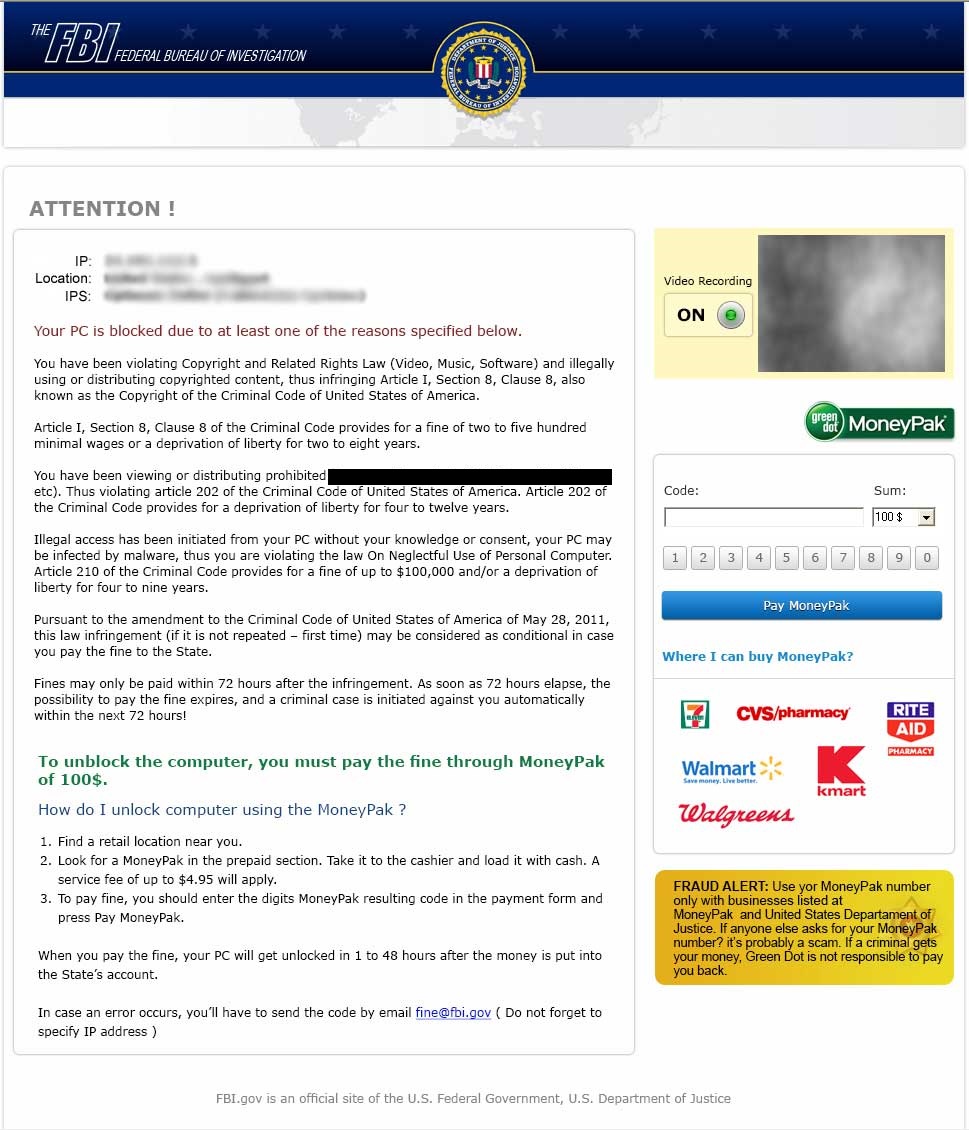 Now, to most people, this will be pretty jarring. As if the accusations were not startling enough, the page also turns on the user’s webcam and displays a live video feed, as if collecting video evidence. However, the page is a clever ruse designed to convince users that the FBI (or some other government organization) believes that they are guilty of a crime and requires them to pay a fine to avoid criminal charges or jail time. Rebooting the computer does not solve the problem, as the virus starts with the afflicted computer. The computer remains locked until the “fine” is paid, and in some cases paying might not even unlock the computer. Now, this type of virus is much more invasive and troublesome to defeat than most, and even harder to avoid. However, in most cases, an experienced technician can find a way around it, so that it can be removed.

CryptoLocker, CryptoWall, and other Encryption Viruses

On the by and large, Ransomware can usually be defeated in relative brevity by technicians with the proper set of knowledge and tools at their disposal. But what happens if the virus does more than just lock up your computer?

A Cryptovirus is one type of Ransomware that not only locks up the user’s computer, but encrypts all the user’s data as well. When the data (which can range from pictures to Word documents to AutoCAD work files) is encrypted, it becomes unreadable and inaccessible unless the person trying to open the files has the decryption key. This can be pretty problematic, as even if the virus is removed, the data will remain encrypted.

What Can Be Done?

Most of these dangerous programs encrypt the files of the victim’s computer with a heavier encryption than the average bank, so trying to crack it is not only unfeasible, but practically impossible.

If the files are of little consequence or not worth the effort, then your technician can remove the virus and get the computer working again, but the data could be lost forever. Occasionally, the good men and women of the various cybercrimes divisions in agencies such as the FBI, Interpol, or alternatively, the employees of various companies specializing in data security, expose a vulnerability in the encryption or manage to obtain a set of decryption keys with which previously encrypted files could be returned to normal.

The first version of CryptoLocker was shut down in a joint effort in such a way, and one of the parties managed to obtain the decryption keys so that victims of this attack were able to unlock their data. As such, if you would appreciate the possibility of eventually getting your data back, speak with your technician about saving the encrypted data somewhere long-term, as the potential for this to happen again exists.

There is also the option of paying the ransom, however such a prospect is usually expensive (in the order of several hundred dollars) and is not guaranteed to work. In addition to this, if one chooses to pay, it can be difficult even to execute such a payment as often the virus maker will request Bitcoin, or some other form of anonymous cryptocurrency, which can be difficult to acquire and transfer. There is also the distinct possibility that any ransom paid could go to the funding of either terrorist organizations, or at the very least, supporting such cyberattacks in the future.

Unfortunately, at the present time, the best way to deal with this type of threat is not to run into it at all. Keeping an up to date antivirus, maintaining good browsing habits, and always reading the screen before you click “accept” should improve your chances.

Preferably, an antivirus providing real time protection should be considered, since these types of viruses are the types that need to be stopped at the gate. Once they get in, it could very well be too late.

Besides this, data backup is paramount. There is no such thing as a perfect defense, and when something does get through and wreak havoc, you will want to know that your data is safe. In some cases, even data backups can be affected, so it’s good to use your local technicians as resources to finding the best strategy for your situation.