Amazon has launched three new cloud computing services targeted at every day users: Cloud Drive and Cloud Player on Web and Android.  The new services allow users to store music on Amazon’s cloud and access it from the web or using a smart phone.  It’s like an iPod in the sky. Even if someone has never heard of cloud computing, they have heard of MP3s or have a song or 10,000 stored on their computer’s hard drive. Now, these users can get 5GB in free storage from Amazon and access music anywhere.  It sounds too good to be true.  Is it?

What’s is the Cloud Drive

Amazon Cloud Drive is a personal cloud service for storing personal files like music, pictures or documents.  The Cloud Drive targets everyday users, unlike Amazon’s popular Amazon Web Services cloud platform.  Using the Cloud Drive, or similar services, users can eliminate the need to constantly move and synchronize files between devices.  Every user is eligible for 5GB of free storage just by signing-up.  If 5MB isn’t enough, then users can purchase up to one terabyte of storage for $1.00 per GB per year. 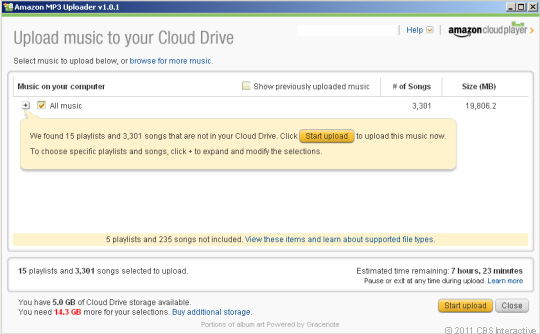 Amazon is also apparently using the Cloud Drive to promote their music service.  Users that buy an Amazon MP3 album, automatically receive 20GB of free storage for one year, and music purchased from Amazon doesn’t count against the storage limit. Once files are uploaded to the Cloud Drive, they can be downloaded or streamed back on most internet capable devices, which is almost everything these days.

The Cloud Drive Makes Everyone Happy, Except…

Amazon’s new Cloud Drive is likely to attract a lot of attention; the company does know a thing or two about attracting customers.  However, not everyone is delighted with Amazon’s cloud merry-making.  Amazon has not received permission from major Hollywood film studios and top record companies to store music and movies on the cloud. Hollywood is making it very clear that they believe current licenses do not allow for cloud distribution or storage, which means Amazon’s new services, violates their legal rights. Hurting the feelings of media elite like the RIAA, could be a costly move for Amazon, just ask LimeWire.

Privacy advocates are also raising red flags. In the Amazon Cloud Drive Terms of Use, users must grant Amazon rights to access files. In fact, users must give Amazon the right

While most users probably didn’t take time to read the small print, many who did might be bristling  at Amazon’s request for complete visibility.  As more average users move from local computers and laptops to cloud storage, they will need to become conscience of exactly how the services they chose to use work. You wouldn’t want your impromptu performance of Great Balls of Fire last holiday getting into the wrong hands, would you?