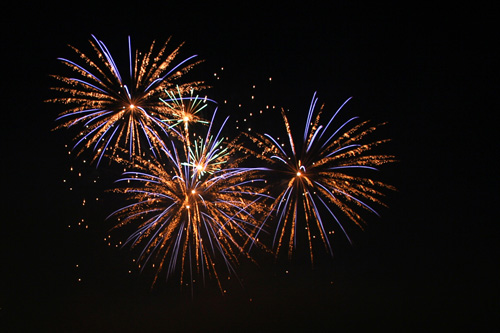 With the Fourth of July right around the corner, many people are already planning to visit their local Fireworks displays. Many of those people, whether they know it yet or not, will want to photograph the event but don’t know how to capture firework photos. Here are some tips to help you get the right shots, even if your digital camera happens to double as your phone.

The first suggestion most will probably figure out the hard way is to turn off the flash – while this may seem obvious when you think about it, many people forget to do so before the event, and the last thing you want to do is miss a great shot because you didn’t have your camera settings properly prepared ahead of time. Even in situations in which you are trying to catch moments with scenes in the foreground and the fireworks in the background, you should still leave the flash off or risk underexposing the fireworks – as your camera focuses on the well-lit foreground, it will often reduce exposure and your fireworks will appear dark.

The second suggestion is to consider investing in a tripod or some sort of stabilizer. Many smartphone cameras these days have a sort of “image stabilization” functionality which is meant to reduce shake and blur during a shot. However, even the best of this technology can prove to be imperfect, especially when dealing with low-light situations or objects that are themselves moving. A stable mounting apparatus can save you a lot of hassle in any situation, really – but can be absolutely necessary in cases such as these. Even if you don’t want a full-fledged tripod, many smaller solutions exist which can mount to poles, railings, or other such objects for the same effect.

This third tip is a little more technical – reducing your camera’s ISO. Many modern smartphone camera apps and digital cameras allow you to adjust the camera’s ISO manually, however nearly all of them are set to automatic by default. For those unfamiliar, the ISO is essentially the camera’s sensitivity to light – having a high ISO is typically very useful in low-light situations, where the camera sensor has to be as sensitive as possible to pick details out of the darkness. In fact, many cameras these days are judged in a large part by their ability to do this, so many leading smartphones tout their low-light camera prowess. However, in this situation, it’s usually advisable to lower the ISO drastically to avoid overexposure and camera noise – since the target of your shot is going to be much brighter than the surrounding sky.

The fourth tip may not be immediately apparent, but it is definitely important. Disable High Dynamic Range (HDR) if your camera supports it. HDR is a technique that takes multiple exposures during a shot and blends them together to enrich color and light sources, and balance out the dark and light sections of the image, to more closely mimic what someone’s eyes might see in the same situation. This type of technique does not work well on moving objects, never mind moving objects of shifting brightness.

The nest suggestion may seem a little impractical if you’re a smartphone photographer, but consider adopting a wide-angle lens. If you’re using a DSLR, this is pretty straightforward so long as you have the right lens attachment for your camera. However, even smartphones can be equipped with an inexpensive clip-on lens for use in capturing larger scenes. Many of such lenses are available on online retailers such as Amazon for relatively short money.

As many flagship smartphones in late 2017 and 2018 have been coming with dual rear-camera designs, there are some important considerations to make when preparing to take photos with such devices. First off, if you’re using a wide-angle lens, make sure you test the lens before use. Depending on the device and firing mode, typically only one of the cameras is really active at a time. Secondly, confirm what mode you’re planning to use beforehand. If your camera is in “Portrait” mode or set to 2X, there’s a good chance it’s using the secondary lens, which is usually better for capturing detailed pictures of people or objects at a distance. It may seem counter-intuitive, but with the size of the scenes being photographed, the telephoto lenses are not typically a good option.

Finally, the last suggestion is somewhat open ended – try some exotic shooting modes. Many smartphones possess at least a few shooting modes beyond the standard camera mode, and some even possess a mode specifically for fireworks. Beyond this, third-party apps or plugins can increase the functionality of your camera even further. To name a few useful non-standard functions of most cameras, you have options such as burst mode, which rapidly captures multiple shots in a short period, long exposure mode, which keeps the shutter open for a longer period to let in more light, and time-lapse mode, which compiles a group of single shots taken over a long period of time into a sort of fast-motion video.

In the case of burst mode, most newer smartphones and cameras have this ability baked right in, and can use it to great effect in allowing you a frame-by-frame compilation of an event for viewing as-is or narrowing down the perfect moment.

For long exposure mode, many cameras have this ability, but often even the newest smartphones need a third-party app to make this work. Long exposure shots are almost like multiple pictures laid over one another – light sources, even weak ones, become more pronounced and moving objects appear blurred or seem to drag along the shot. Play around with the exposure times from a couple seconds or more to see what works for you, but make sure the camera remains as still as possible during the exposure.

With time-lapse shots, some cameras have the ability, but many do not. Likewise, many smartphones require a third party app to use this function. Like long exposures, time lapses look best when the camera is kept as still as possible during the shooting, so a tripod or other device is necessary here, however the results can be quite impressive.

Always be sure to test your settings beforehand to ensure you’re properly prepared, and if you download any apps or try any new functions, give yourself some time to get used to them. Everyone at RGB Computer Solutions wishes you a safe and happy Independence Day!